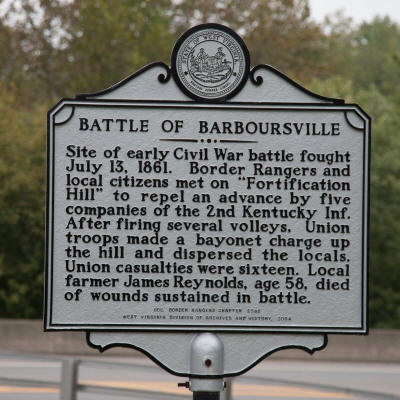 “One of the first battles of the Civil War was fought in Barboursville on July 11, 1861,
between the Wayne and Cabell County militia under Colonel Ferguson, and the
Second Kentucky under Colonel Woodruff. The militia could not stand up under
the bayonet charge, and retreated in haste, leaving one dead, a Mr. Reynolds,
from Milton, and Absolom Ballinger wounded. Federal loss, five killed and
eighteen wounded. I though our Militia was well trained, but lost confidence
in them when I watched them in action during this fight. Our second fight
was on Main Street in September 1862 between the Eighth Virginia
Cavalry and a regiment of Ohio Cavalry under Colonel Powell. This
battle was fought after night. Both sides retreated, one Union
soldier being killed. The Eighth Virginia Cavalry was
commanded by General Jenkins, and most of the
boys from our county belonged to it.”