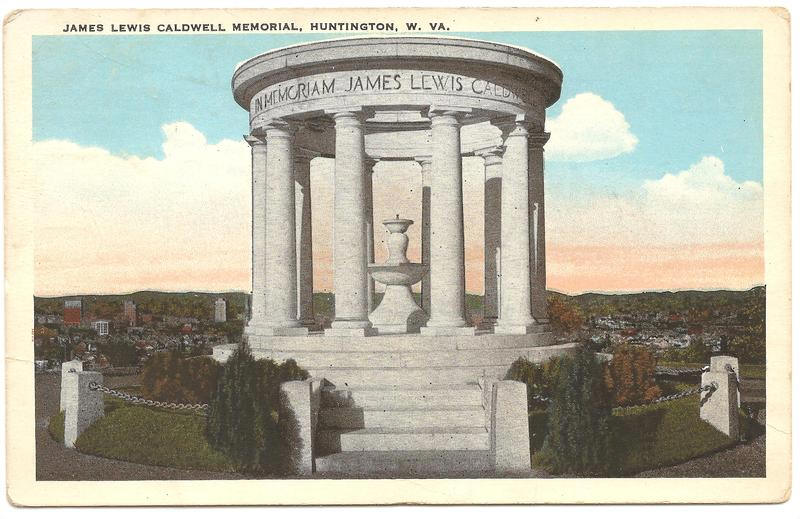 HUNTINGTON -- Prominent businessman J.L. Caldwell (1846-1923) built Huntington's first streetcar
line and was president of the First National Bank for nearly 40 years. In 1926, the Huntington Board of
Park Commissioners granted Caldwell's family permission to erect in Ritter Park a marble fountain
honoring him. The fountain is said to have cost $20,000 - quite a sum of money in that day.

The family located the memorial on the hill known as Gobbler's Knob, near the current park amphitheater.
Over time the memorial's isolated location made it a tempting target for vandals, who carved their names
and initials into its tall marble columns. Thieves carried off the floodlights that had been installed
to illuminate it at night. At some point, the fountain itself, which had
featured a constant stream of water, stopped working.

In 1939, one of Caldwell's daughters, Ida Caldwell McFaddin of Beaumont, Texas, complained
that on a return visit to Huntington she had been "shocked and hurt" to see the monument's sad
state. She asked the Park Board to either repair it or tear it down. Her request set off a years-long
tug of war between the strong-willed McFaddin and the members of the Park Board, who apparently
hoped that at some point she would simply go away. Instead, she continued to pepper the board
with angry complaints. Finally, in 1945, the board directed that the once-grand memorial be dismantled.

Note:  This Article and picture appeared in the Herald-Dispatch Newspaper on Dec. 09 , 2013