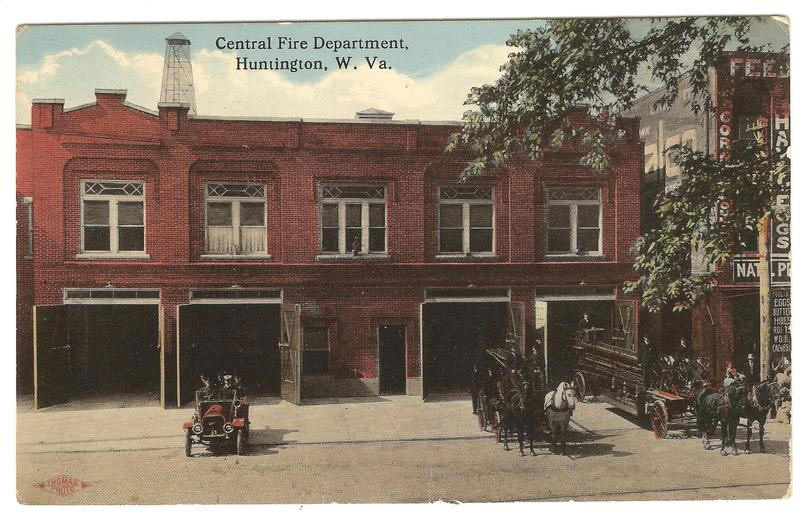 Huntington's -- Central Fire Station opened in the 700 block of 3rd Avenue in 1914, in an era when firefighters
still galloped to fires behind pumpers and ladder wagons hauled by trained teams of spirited horses.
The station would remain the Huntington Fire Department's headquarters for an incredible 58 years.

The picture postcard of Central Station reproduced with this article was postmarked in 1915.
It shows only one piece of motorized fire equipment, a chief's car, most likely a Model T Ford.
On display in front of the station with it are a pumper and a ladder wagon, both horse-drawn.
Stubborn old-timers insisted that the new-fangled internal combustion engine would never
replace a sturdy team of horses, but time proved them wrong. By the early 1920s,
Central Station had put its horses out to pasture.

The station served the department well for decades but ultimately became sadly outmoded
and, eventually, an embarrassment to the city. Long-time Fire Chief John Gallagher
repeatedly urged its replacement but his pleas fell on deaf ears.

Finally, in 1972, the department moved out, relocating to the new Centennial Station,
erected at 7th Avenue and 9th Street and named in honor of the city's 100th birthday.
Later the old Central Station would be demolished, to be
replaced by the Big Sandy Superstore Arena.

Note:  This Article and picture appeared in the Herald-Dispatch Newspaper on Dec. 15 , 2013