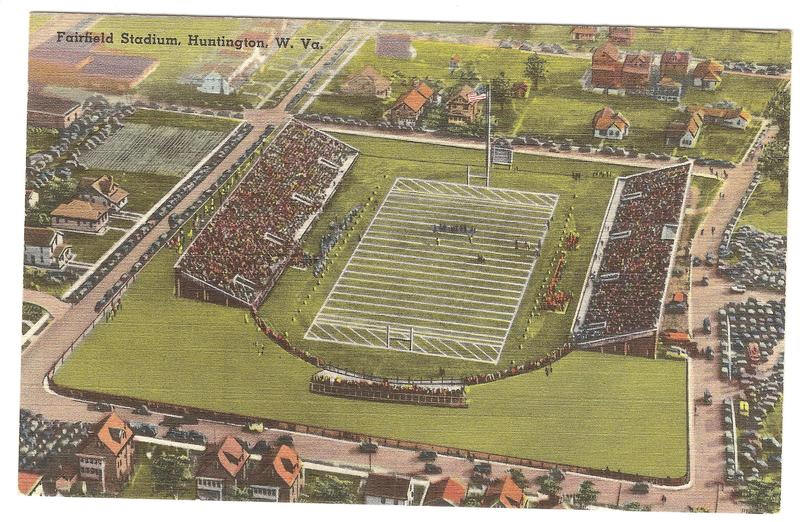 HUNTINGTON — Today, Marshall University plays football at Joan C. Edwards Stadium.
But for more than 60 years — from 1928 to 1990 — Fairfield Stadium was the home of
the Herd. The old red brick stadium was also the site of countless
high school football games and a wide variety of other events.

When the Huntington Board of Park Commissioners was created in 1925, one provision
of its charter empowered it to join with Marshall and/or the local school system to
erect a stadium. To that end, the park board purchased a tract of land bordered by
Charleston and Columbia avenues, between 14th and 15th streets. The property
had first been used as a commercial gravel pit and later as garbage dump.

From the outset, Fairfield’s three-way ownership was a prescription for trouble.
With no one group solely in charge, essential maintenance was neglected
and the stadium badly deteriorated over the years. In 1962, city
inspectors slapped a CONDEMNED sign on the structure.
Repairs were made and the stadium reopened.

In 1970 Marshall said it would undertake a major upgrade of Fairfield but only if the park board
and the school system gave up their shared ownership. This they did, and Marshall installed an
Astroturf playing surface, built new dressing rooms and made room for 6,800 more seats
by lowering the field. But the outmoded stadium was living on borrowed time.
Marshall played its last game at Fairfield on Nov. 10, 1990,
and then happily departed for its new stadium.

Today, old Fairfield is gone — only the memories remain.

Note:  This Article and picture appeared in the Herald-Dispatch Newspaper on Feb. 16, 2014