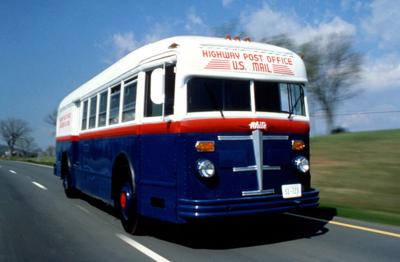 Now obsolete, Highway Post Offices once were a familiar sight on the
nation’s highways. This one is preserved in the Smithsonian’s collection.
Courtesy of Smithsonian Institution

For years the Post Office used specially equipped railroad cars where clerks could
sort mail while passenger trains were chugging along the tracks. By the late
1930s, highways were stretching across America, and the U.S. Post
Office Department began to consider creating Highway Post
Offices (HPOs), bus-like vehicles designed to operate
like the Railway Post Offices (RPOs).

The first HPO entered service on Feb. 10, 1941, traveling a 149-mile
route between Washington, D.C., and Harrisonburg, Virginia.
Two more HPO routes opened later in the year, one
between Indianapolis and South Bend, Indiana,
and one between San Francisco and
Pacific Grove, California.

The outbreak of World War II interrupted the addition
of new routes. After the war ended, HPO service
was revived with hundreds of new routes open

On April 30, 1956, an HPO route was established
between Parkersburg and Huntington.

The interior of the HPOs was very similar to RPOs. Each vehicle
could hold about 150 mailbags. To keep the mail safe, there
was a locked gate between the postal clerks and the driver
(often a hired contractor rather than a postal employee).
There were also bars on the windows.

Just as on the RPOs, the HPO clerks sorted the mail while the
vehicle was in motion. But while trains moved at a mostly
steady pace, HPO clerks had to deal with poor roads,
potholes and frequent stops and starts. Their job
wasn’t an easy one. The routes themselves
were typically less than 150 mile in
length to avoid stops for refueling.

But the HPO era proved short. In the 1960s, the Post Office
underwent a sweeping reorganization which saw the
introduction of ZIP codes and the establishment of
sectional centers, which meant HPOs
no longer had a role to play.

It’s not known when the Parkersburg-Huntington route
was ended, but the last HPO was parked in 1974.

Note:  This Article and picture appeared in the Herald-Dispatch Newspaper on May 24, 2022..