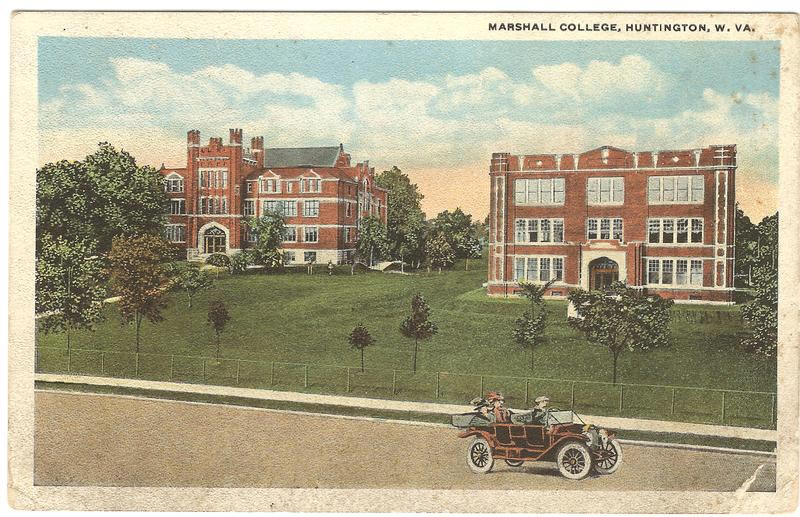 HUNTINGTON -- Until 1915, the future Marshall University was a one-building school. Old Main,
shown at left in this vintage postcard, housed classrooms, offices, a library, a dining hall, a women's
dormitory, an auditorium and even a basketball court in the basement. The second building
built at the school, Northcott Hall, can be seen to the right of Old Main.

Members of the Masonic Lodge laid the cornerstone for Northcott Hall in the fall of 1915,
sealing in the cornerstone a box containing various college memorabilia.
The building was occupied the following April.

The building was named for prominent Huntington retail merchant and political figure Gustavus A. Northcott.
Born in Murfreesboro, Tenn, in 1861, Northcott represented Cabell County in the West Virginia Legislature
and was president of the State Senate from 1905 to 1907. He died in Huntington in 1938.

When it was built, Northcott Hall primarily housed classrooms for the various sciences.
In the basement, the science labs shared space with a kitchen for the school's
Department of Domestic Science, where future homemakers gained practical experience
by preparing catered luncheons for groups such as the Huntington Rotary Club.

After construction of Marshall's new science building in 1950 Northcott was used for other
classes, including business and art. It was demolished in 1995 to make way for
Marshall's John Deaver Drinko Library. The intricate carved stonework at Northcott's
main entrance was conserved and incorporated into the
Hal Greer Boulevard façade of the new library.

Note:  This Article and picture appeared in the Herald-Dispatch Newspaper on Jan. 06 , 2014