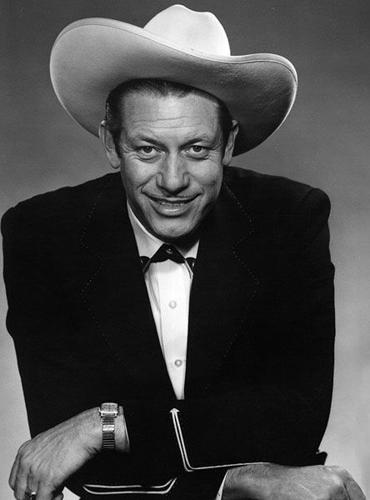 Before his life was tragically cut short in an airplane crash,
Hawkshaw Hawkins was one of West Virginia’s
best known country musicians.

He was born Harold Franklin Hawkins in Huntington in 1921, the son
of Icie Graham Hawkins and Alex Hawkins, who retired from Kerr
Glass in Altizer. Growing up in the city’s West End, he gained
his nickname as a boy after helping a neighbor track down
two missing fishing rods. The neighbor called him
“Hawkshaw” after the title character in a
comic strip, “Hawkshaw the Detective.”

Hawkins got his start in music after he traded five trapped rabbits
for a homemade guitar. He taught himself to play and soon was
performing on local radio stations — WCMI in Ashland,
WSAZ in Huntington and WCHS in Charleston. Joining
the Army during World War II, he served in France
and saw combat in the bloody Battle of the Bulge.

After the war, he became a regular performer from 1945 to 1954 on the
“Wheeling Jamboree,” broadcast from WWVA. Beginning in 1954, he
was a regular on TV’s “Ozark Jubilee” in Springfield, Missouri,
where he met and married singer Jean Shepherd. He
later joined the “Grand Ole Opry” in Nashville.

In 1946 he signed a recording contract with King Records
in Cincinnati and hit the charts with five top-10 records.
He then recorded for RCA Victor and Columbia. In
1962, he returned to King and recorded his biggest
hit, ‘‘Lonesome 7-7203,’’ but did not live to
see it reach the top of the charts.

On March 3, 1963, Hawkins, Patsy Cline, Cowboy Copas
and Randy Hughes died when their small private plane
crashed as they flew back to Nashville from a benefit
concert in Kansas City. Hawkins was to have
flown commercial, but when he found
out a friend needed to get home for
an emergency, he gave his
ticket to him instead.

In 2009, Hawkins was inducted into both the Huntington Wall
of Fame and the West Virginia Music Hall of Fame.

Note:  This Article and picture appeared in the Herald-Dispatch Newspaper on Apr. 19, 2022.