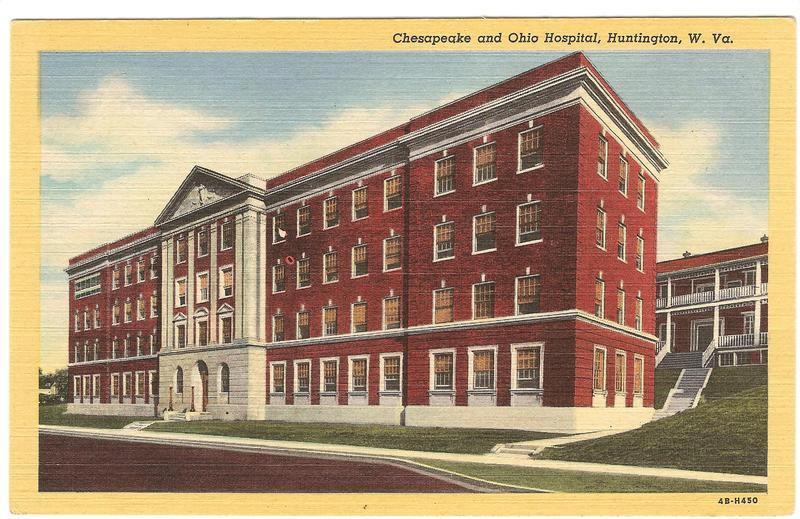 The Huntington hospital opened in 1900 in a former residence at 6th Avenue and 18th Street
that had been built by Peter Cline Buffington, the city's first mayor. The hospital quickly
outgrew the old house and so a new four-story building was built nearby.

The system worked well for decades but by the 1960s it faced two problems: First,
the increasing availability of medical care negated the need for C&O employees to
travel so far for hospitalization. Second, the end of rail passenger service meant
C&O employees no longer could use free passes to travel to the hospitals in
Huntington or Clifton Forge. Reluctantly, the association
was forced to close its hospitals.

In 1971, the old building was put to new use as Doctors' Memorial Hospital,
a community hospital named in honor of three Huntington doctors - H.D. "Pete" Proctor,
Ray R. Hagley and Joseph E. Chambers - who were killed in the 1970 Marshall University plane crash.

In 1974, a private non-profit bought Doctors' Memorial so the building could be used by MU's
then-new medical school. When new facilities were constructed at the VA Medical Center
and Cabell Huntington Hospital, the med school moved out. In 2001, the vacant building
was demolished so the site could be used for student parking.

Note:  This Article and picture appeared in the Herald-Dispatch Newspaper on Jan.. 20, 2014