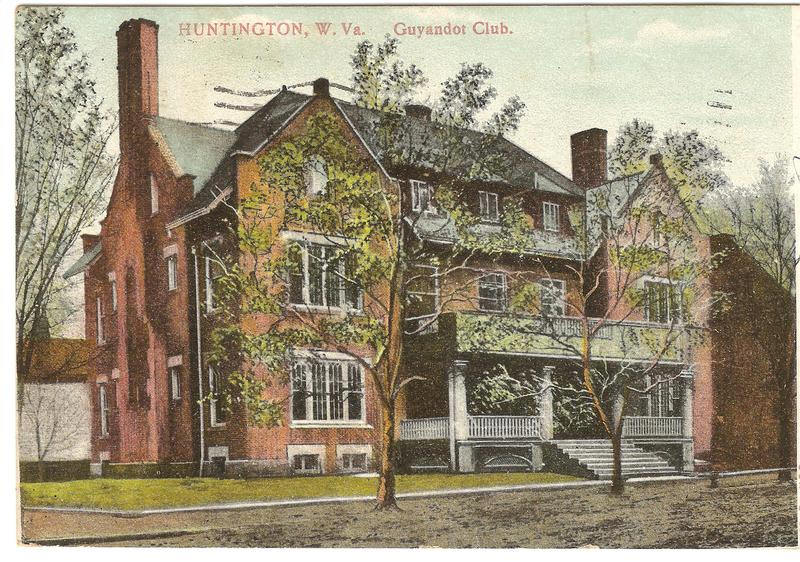 GUYANDOTTE -- Organized in 1903, the Guyandotte Club's exclusive membership included many of the doctors,
lawyers, bankers and other businessmen in the young city. There were, of course, no women members. Not
in that bygone era. A committee tasked with naming the new club unanimously chose "a name significant
of the great Guyandotte Valley from which much of Huntington's trade
comes now and will continue to come in the future."

The club purchased a large lot at the southeast corner of 4th Avenue and 11th Street and there built an
elegant three-story brick clubhouse. On the evening of Feb. 22, 1905, the completed clubhouse was
shown off to the public at an open house that drew an admiring crowd of more than 500 people.
Over the years the clubhouse was a favorite luncheon spot for the city's businessmen, with some
lingering on for an afternoon round of billiards or maybe a few hands of cards.
More serious card players took part in late-night poker games
that often stretched into the wee hours.

The 1937 flood swept away that leisurely life. The raging water engulfed the clubhouse's
first floor and left it a soggy ruin. Restoring the damaged structure would have been a daunting
task at any time, but was an even greater challenge at a time when Huntington, like the rest
of the nation, was still in the grip of the Great Depression.

The club members moved to rented quarters in the Hotel Frederick and reluctantly put their
damaged clubhouse up for sale. It drew no takers until 1939, when a buyer demolished it to
make way for a new service station. The club itself continued on at the Frederick.
But in 1966, in the face of a steadily diminishing membership, changing social
customs and increased costs, it quietly went out of business.

Note:  This Article and picture appeared in the Herald-Dispatch Newspaper on Jan. 13 , 2014