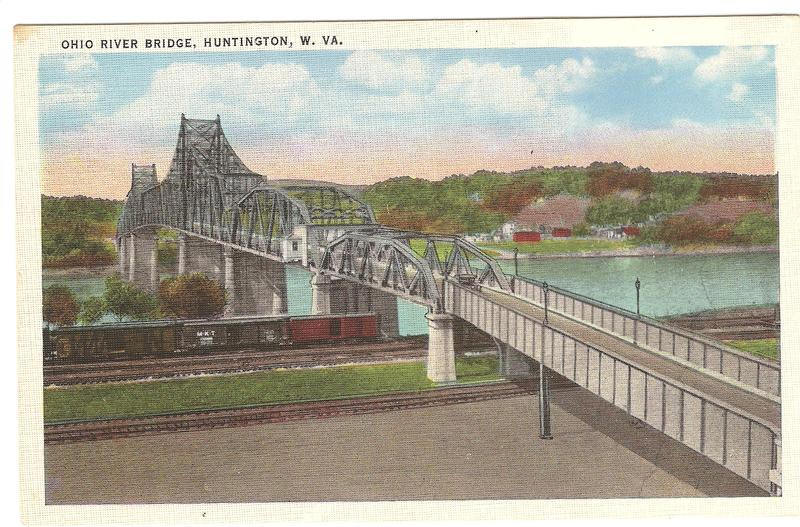 HUNTINGTON -- Collis P. Huntington, who founded the city of Huntington in 1871,
foresaw the day his namesake town would need a bridge across the Ohio River.
He even bought a plot of Ohio land for the purpose. But the city would be more
than 50 years old before its first Ohio River bridge was constructed.

The bridge was built by a group of a dozen Huntington businessmen organized
by timber tycoon C.L. Ritter. In April 1925, they chose a site just west of the
city's downtown at 6th Street and construction began. The span was opened
to traffic on May 23, 1926, with an estimated 10,000 visitors on hand
for the dedication ceremonies. Cars using the bridge were charged
a toll of 25 cents. Trucks paid up to $1, depending on their size.
Bicycle riders and pedestrians paid 5 cents.

The bridge was privately owned until 1940 when the builders sold it to Cabell County for
$2 million. In 1952, deferred maintenance had caught up with the bridge
and the county was unable to finance the needed repairs. So the
county was happy to turn the bridge over to the state.

In the late 1950s and early 1960s, drivers waiting to cross the two-lane span clogged
the city's downtown streets at the evening rush hour, and the Ohio
side saw a similar traffic snarl in the mornings.

Finally, in 1968, Huntington got a second Ohio River crossing, at West 17th Street.
And in 1986, after decades of controversy and delay, the
East Huntington bridge was completed and opened.

In mid-1993, the Sixth Street Bridge was closed to traffic to allow for
construction of an adjacent four-lane bridge (the city's first). The
new bridge was completed in 1994 and named for
Sen. Robert C. Byrd. The following year, a series
of carefully placed explosives blasted the
Sixth Street Bridge into history.

Note:  This Article and picture appeared in the Herald-Dispatch Newspaper on Feb. 24, 2014